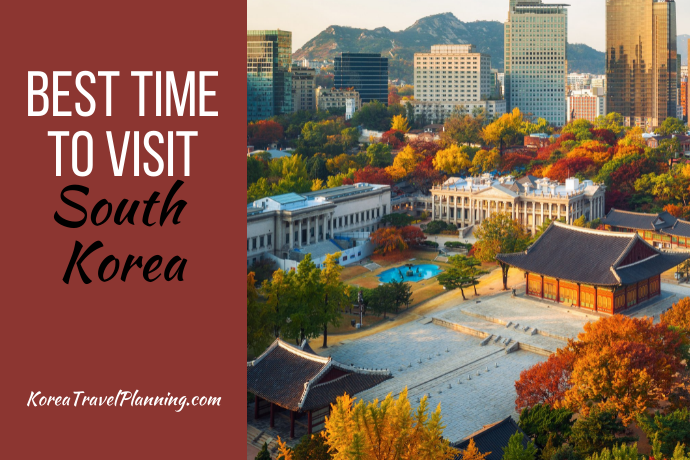 One of the first questions most people ask when planning a trip to South Korea is when is the best time to visit?  There is no simple answer as it depends on your particular interests.  Also, many people are constrained to visit at specific times such as school holiday periods which limits your options. If you are more flexible you can seek out a great airfare deal in a non peak time.

Other people visit South Korea with an intent to attend a specific event such as a festival or K-Pop event, so it is worthwhile to do your homework on these activities before you book your flights.

In general, the best time to go to South Korea is between March and May in the Spring and between September to November in the Autumn/Fall, as these periods are usually sunny, warm and dry. If you love skiing then make sure you check out the options over Winter. And while hot and humid, there are many great festivals to experience in Summer.

To ensure you are orientated, below is a map showing the major tourist destinations in South Korea – just click on the symbol on the map to learn more about that location without leaving this page. Seoul is in the north west, Busan is in the south east and Jeju Island is in the south. There are mountains throughout South Korea

Weather in South Korea is quite variable depending on what season you travel in and which parts of South Korea you travel to.  We have put together a detailed guide for Seoul, Busan and Jeju Island seasonal weather and major events to help you plan your visit.

Winter in South Korea is dry, cold and often windy.  In December Christmas celebrations kick on in earnest.   Across South Korea it is the skiing season, with resorts located in the northern, mid and southern areas of South Korea. The South Korean ski season typically starts in early December, peaks in January and February and extends through to March/April.

Major Korean Festivals and Events in Winter are as follows:

Typical Winter weather in Seoul, Busan and Jeju Island is shown in the below tables.

Spring in South Korea – March, April and May

Spring in South Korea is one of the most popular times to visit.

Overall the weather is progressively warming across the season.  If you are travelling in the mountain areas plan for the weather to be cooler.

Major Korean Festivals and Events in Spring are as follows:

Typical Spring weather in Seoul, Busan and Jeju Island is shown in the below tables.

Summer in South Korea is typically hot and very humid, and the arrival of the monsoon rains from late July to August makes it the wettest time of the year.

August is the major typhoon month (with typhoons also possible in July and September), with several typhoons likely to affect South Korea, bringing torrential rain. August is also the main summer holiday month in South Korea, so expect tourist locations and beaches to be very busy.

Major Korean Festivals and Events in Summer are as follows:

Typical Summer weather in Seoul, Busan and Jeju Island is shown in the below tables.

Autumn in South Korea is one of the best times to visit, as the weather is much milder and dryer and the fall foliage colours are amazing. September can be transitional, varying quickly between hot and cool temperatures before the mostly perfect Autumn days of October and November.

Major Korean Festivals and Events in Autumn/Fall are as follows:

Typical Autumn / Fall weather in Seoul, Busan and Jeju Island is shown in the below tables.